Anyone who has been involved with organizational process improvement initiatives will tell you that it’s hard work. After all, they’re called initiatives for a reason – the activity needs to be initiated, energetically – the furthest thing you can imagine from spontaneous combustion. In fact, moving the operating system away from equilibrium requires a constant supply of energy (leadership). It’s not that people don’t want to improve their circumstances and elevate the performance of their organization, it just requires lots of planning, lots of coordination, lots of communication, lots of cajoling, and lots of commitment to stick with it day after day after day. It’s particularly difficult to do all of this consistently enough to reach all employees and really change the organizational mindset, and that’s why the story I’m going to relate is so impressive.

Recently, I took an Uber ride from Phoenix Sky Harbor Airport late on a Friday night. I asked the Uber driver about his experiences with Uber, which is a MoreSteam client. As we chatted, I mentioned that my company had done some lean six sigma training for Uber, and the driver said “oh, you mean like kaizen events and developing standard work?” That was a little outside the norm of my experience with drivers, so it got my attention. 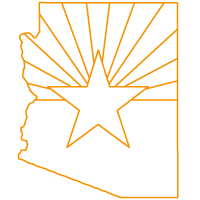 I asked the driver how he had become familiar with those terms, and he told me about his day job with the State of Arizona in the HR function of the Department of Corrections. He told me how he had participated in kaizen events to make the department more efficient, how the governor had hired a COO tasked with implementing organized process improvement across all state operations,

Subsequently, I had the opportunity to speak with the State's COO, Gilbert Davidson, as well as Robert Woods, who is Administrator of the Government Transformation Office. They were really happy to hear the Uber driver story, and rightfully so. Lots of people talk about building a culture of process improvement, but it’s really hard to get everyone on board to actively contribute. The State has developed the Arizona Management System, which is the primary framework for improvement — a standard operating system to encourage process excellence. Here’s an excerpt:

“...Arizona is deploying a professional, results-driven management system to transform the way our State government thinks and does business as one enterprise. State agencies are doing more good for Arizona by tracking and improving their performance each and every day.”

I predict that we'll be hearing more about this.

I’m reminded of an exchange with the then-Mayor of Fort Wayne, Indiana that took place in the early 2000s. Graham Richard was an early adopter of lean six sigma in government. He said that the only way he could survive as a Democratic politician in a red region was to focus on actually getting things done – that getting things done efficiently transcends politics. It seemed to work for him.

There’s plenty of non-political work to be done, and we’d all be better off if it got accomplished with effective efficiency.

If you are interested in the application of Lean Six Sigma within government operations, you might want to review a recorded webcast on the process improvement programs at the City of Detroit or the City of Gahanna (Ohio).

If you'd like to learn how to apply lean methods within a service organization, consider MoreSteam's online Lean 1-2-3 Series or Kaizen Leader courses.