I noticed an interesting comment by Clemson linebacker Ben Boulware after the US College Football National Championship Game last night: "All year we controlled the input. All night we controlled the input with our attitude, our mentality, our mindset and let the output take care of itself." Sounds like the foundational thinking of process improvement — identifying the inputs that you can control, then focusing on those inputs in order to achieve the desired output.

So the simple map looks liks this:

In terms of Systems Thinking, the coaching staff has moved their focus upstream from events to the system and on back to mental models, which determine everything else. 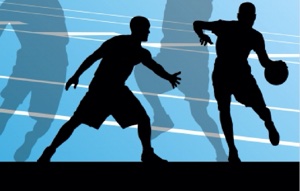 If you follow college basketball in the US, you may be aware of another great example of coaching the inputs from the University of Louisville. Coach Pitino has a reputation for pressing the entire game, a strategy designed to wear down the other team, generate turnovers, and yield quick easy scores.

Scoring lots of layups is not something you can manage directly, so you must move upstream in the process to a critical input: turnovers. But turnovers also can't be managed directly, they are an output of certain activity — pressing and deflecting passes. And of course success in pressing and deflecting passes is predicated on other more fundamental inputs: physical condition, positioning, and use of the hands. The necessary physical conditioning is in turn an output of the amount of running in practice.

Not surprisingly, Louisville is known for non‐stop practices with constant running, the necessary preparation to enable execution of the strategy (or execution of the opponent, depending on how you look at it). If we go up stream one more step, there's an attitude at play: the willingness to do the hard work necessary to drive an effort‐based strategy.

Again, managing the overall process starts with instilling the right mental models, which lay the groundwork for success.

And what does Louisville measure and reward in order to manage the process? Deflections — because as an input that determines steals and ultimately scores, deflections are much more controllable and manageable than the ultimate desired output, and deflections have a very predictable relationship from cause to effect.

Now, here's the operative question, are you measuring the deflections in your process, or something even further up stream, or just the score?

Here's a good article on Pitino's approach to deflections.