Leading up to the Olympics in London, the cabbies of London staged a protest over special traffic lanes being dedicated to VIP Olympic travel only. The special lanes (30 miles of roadways taken out of service) were developed to help Olympic VIPs to move between venues at a much faster rate than the typical gridlocked traffic of central London. The fact that the cabbies were banned from these special lanes was the central issue of their protest. So, on July 27th, traffic in central London came to a halt, stopped dead for about three hours.

The cabbies have a good point. The road system in central London, already at capacity, is known for long queues and long delays. With the influx of Olympic athletes, staff, and fans (over one million extra people are expected in central London) demand for those roads will only increase. So the equation becomes this:

The equation looks like a recipe for failure. A retailer would never think about cutting back on staff right before the holiday shopping season, would they? And a factory wouldn't cut out the third shift of production when they know they have a huge order they're about to start making. But, the situation might require a little more analysis. 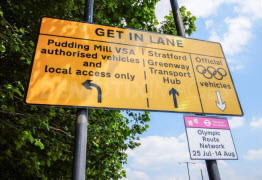 The dedicated Games Lanes are actually like creating a focused work cell in a factory or a case team in a transactional process. The cell is focused on a very limited number of items or customers (VIPs in this case) and is designed to process those limited items very efficiently.

The goal here is that the efficiency of the focused cell will regain some of the capacity lost when all of the parts or customers are mixed up together in a single process. In this case, the underlying premise is (or should be) that the dedicated Games Lanes will operate with enough additional efficiency that the efficiency gain will make up for the loss in flexibility that results from the dedicated cell. Makes sense, more or less.

Of course, rule number one in cell design is to make sure you have enough demand to fill the dedicated cell. In a factory, there is little more frustrating than a dedicated machine in a cell sitting idle while the general pool of machines are backlogged. Just as it's quite frustrating to see an empty platinum security lane at the airport while you stand for 45 minutes waiting to get through security.

Questions for the Olympic Organizers

Thinking as a Lean practitioner, the questions then become:

So what is the answer? Have the Games Lanes helped, or hurt, London traffic?

Did the Lanes Work? The Proof Is in the Pudding

Prior to the start of the Olympics, as the Games Lanes were set up, traffic snarled, with added delays of an additional two hours. So the answer for the pre‐games time is no. It's just not a good idea to steal capacity from a system that is operating at or near 100%. Now that the games have begun, we've seen a different pattern. The traffic in central London is actually flowing quite smoothly, which might earn the Games Lanes a nod of approval. But alas, the Games Lanes have been reported to be nearly empty, with few official Olympic cars traveling them (and, of course, no taxis).

What happened? Less capacity and an underutilized Games Lanes work cell should not equal better traffic flow. The answer is simple. Londoners, wary of the Games Lanes concept, simply abandoned most, if not all, hope of travelling into central London during the Olympics. So traffic volume decreased between 20 and 30 percent over regular volume.

In a simple move of mental health self‐preservation, enough of London decided to just stay home and wait out the Olympics. Restaurant traffic is down. Cabbie business is way down. Road traffic is down. Hotel bookings are, quite remarkably, reported to be down, although they jump right back up after the Olympics. One cabbie is quoted in a BBC.co.uk story as saying "The Olympics have killed London". Ironically, after all of the controversy of the Games Lanes, Britain's transport minister actually called on the VIPs to set a good example and use the ordinary lanes and public transportation, further reducing demand for the Games Lanes.

Interestingly, the same thing happened in my small U.S. town recently, when the Senior PGA tour came to town. Everyone feared the onslaught of spectators and the traffic and excruciating waits for restaurants. And the result was the same as London: dedicated golf cart lanes caused traffic jams in the remaining lanes, and restaurant owners reported slow business.

Two data points do not make a trend or a significant finding, but they certainly motivate the question of who actually benefits when a community hosts a large‐scale event of any kind. Darn that special cause variation…

http://www.telegraph.co.uk/sport/olympics/news/9438078/Commuters-stay-at-home-to-avoid-Olympic-traffic-chaos.html—commuters stay away, traffic load down 30%