Leading with a Constancy of Purpose

Recently, we hosted a Best Practices in Operational Excellence Conference in Vallendar, Germany. While I was there, I looked out the hotel window at a small village along the Rhine River in Germany, and it's striking how old everything appeared (from an American perspective), including a castle dating back to the 1200's. In comparison, so much of what we experience in the software business is new and fleeting, and constantly changing. 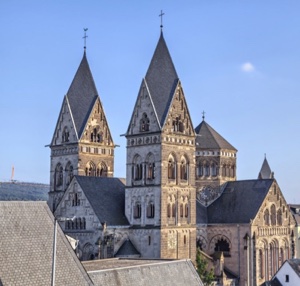 It's interesting to spend time in a visual environment that provides such a different temporal grounding and long term perspective. The church that was across the street had probably been there for 400 years or more, and when it was built, the builders had every reasonable expectation that it would be there for centuries. It's a much different situation in the modern business world, where so much of what we build has a very short and indefinite lifespan.

I wonder if the accelerated pace of market changes and technology shifts is one of the reasons that so many organizations have lost focus on their process improvement efforts. We've seen a lot of senior leaders walk back their support of organized process improvement, through acts of commission or acts of omission.

Maybe it's just too hard for some leaders to deal with all the change and also be unchanging at the same time. It's certainly hard to practice the "constancy of purpose" that Deming promoted, and leadership attention will ebb and flow a bit under the best of circumstances, but we seem to see more ebbing and less flowing when it comes to organized process improvement.

Maybe this is part of some grand experiment to see what can be accomplished without any real sustained organizational effort. One thing is for sure: attention is not ebbing because all the problems are fixed — you don't have to look very far in the commercial world to see that they are not.

Sometimes program failure is born by a premature declaration of success. I'm shocked by the number of companies who are electing an ad hoc approach to process improvement — declaring that it's "now in our DNA" without doing any genetic testing to prove it or even observing the organizational traits that would clearly indicate that organizational DNA is the same old DNA.

I suspect that the wheel will turn when there is a sufficient weight of evidence to show that financial performance lags when process improvement is left to chance. But don't we have enough already? Perhaps someone will discover a new approach to lean six sigma predicated on senior leadership engagement and sell that level of engagement as the new elixir. We can only hope.

In the meantime, if you are trying to help turn that wheel, you'll probably find that it's hard to get leaders engaged, but don't assume that they know what to do and decided not to do it. They may not know what to do. You need to provide an operational definition of leadership engagement, then you need to explicitly ask for what you need.

Create the standard work you'd like to see — public messaging, attendance at training, participation in project reviews, gemba walks, recognition events, etc. and then ask your leaders if they can do those things to help you out. They may elect not to, but give yourself a chance by communicating what you need, and give them a chance to say yes.