After a successful and productive career in Lean Six Sigma, Joe Tanner could take it easy and relax. He could enjoy retirement on the couch, catching up on his favorite TV shows.

But that's not really his style. Joe actually went the opposite direction after retirement, seeking new adventures and opportunities to live life to its fullest.

After retiring as a Lean Six Sigma Advisor at Eli Lilly, Joe started exercising regularly, losing more than 100 pounds during the past few years. That transformation made it easier to pursue life‐changing experiences all around the globe — including a three‐week expedition to Antarctica in early 2020. 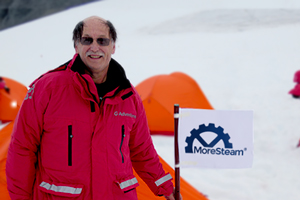 "The older you get, you realize you only have one shot at life. One of these days it's going to be all over, so you better make the most of it while you can," Joe said.

Joe also continues to share his professional expertise with leaders around the world as a consultant on MoreSteam's Client Services Team. We caught up with him recently to talk about his thrill‐seeking excursions, his background with Lean Six Sigma, and why he continues to keep his calendar so busy after retiring.

Let's start with your professional background. What initially piqued your interest in Lean Six Sigma?

To be honest I started on my Green Belt because I didn't think the methodology would actually work. I wanted to prove to my boss that this was not a worthwhile endeavor. And the best way to do that was to learn the terminology and methodology to use their own words to prove them wrong. Working in the corporate world for over forty years I can't tell you how many things like Six Sigma came and went. If you ignored these initiatives long enough, they just went away.

I truly thought Six Sigma would be the same. When my first Green Belt project worked and the project saved money, I thought it was a fluke, so I did a second, and it worked. At that time, I realized I was wrong, this methodology DOES work. I progressed to my Green Belt, Black Belt then Master Black Belt. I went from being one of the biggest doubters to one of the biggest proponents of Six Sigma. To this day, as I'm teaching, I look for the people in the class who are the biggest doubters, because I was there and can certainly relate.

What type of work do you do with MoreSteam?

I facilitate simulations and study halls, as well as doing some project coaching. I like getting to work with people across a wide variety of industries. I've worked with the United States Postal Service, U.S. Navy, and a variety of utility companies, just to name a few. Most recently I even facilitated a few simulations for Eli Lilly — this time as a consultant rather than an employee.

One of the things I really enjoy is helping people through the process improvement activities of the simulations. It's great to see the lightbulb go on in their eyes when they get the concept I'm teaching.

Why do you continue working in Lean Six Sigma after retiring from your full‐time position with Eli Lilly?

It's funny, I think we all dream of retirement while we're working. No meetings, no work, only time to do what you want to do. But the truth is, no matter what you consider your dream retirement — fishing, hunting, reading, traveling, etc. — doing that can be fantastic in the short‐term but in the long term it can get boring pretty quickly, at least for the majority of people.

About five months before I retired, I called (Moresteam CEO) Bill Hathaway, asking if I could help with any teaching or training. Teaching has really turned into my passion. Helping someone understand a concept or tool keeps me engaged and is exceptionally fulfilling. So, even before I retired, I started with Moresteam.

I'm extremely fortunate that I don't do this because I have to, I do it because I truly enjoy it. I think students notice that whenever I'm teaching a class or facilitating a simulation. The minute I lose that passion and don't enjoy it anymore, I'll stop.

Moving on to your global adventures, what drew you to Antarctica?

You can't study leadership without reading about Ernest Shackleton and his ill‐fated trip to Antarctica. He was beaten to the South Pole by Roald Amundsen so he decided he would cross the Antarctica continent via the south pole. Their ship, Endurance, ended up getting trapped in ice in the Weddell Sea for nine months before the ship was crushed. They drug their three lifeboats on the ice for months before launching to Elephant Island. Most of his men were trapped on Elephant Island during winter for several months. Winters there are usually ‐70 F with gale force winds. All in all, they were gone two years without losing a single man.

The three‐week expedition I took followed Shackleton and his men's journey. I kayaked in the Weddell Sea, slept in a tent on Antarctica for a few days and saw incredible wildlife and natural beauty. We drank a shot of whiskey for Shackleton at his grave in South Georgia. I was standing on the ship looking at the small spit of land his men stayed at on Elephant Island for months, enduring the brutal conditions. I was in a modern parka with several layers of insulation and feeling so cold — and for us it was only 10 F with a steady wind — I couldn't imagine how they survived the obstacles, both physical and mental.

What other highlights stood out from the trip?

The entire experience was amazing. Each day there was something new to experience. On day three, in the Drake Passage our ship was surrounded by a super pod of Orcas. 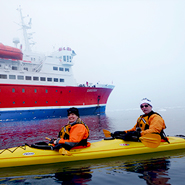 Kayaking was amazing; we were able to get within 30 feet of three 10‐ton humpbacks feeding. When their flukes hit the water, the kayak would bob up and down because we were so close. One island had over 800,000 penguins, some of which would come up and peck on your boots. My memories are captured in 10,000 pictures and 300 videos.

While you were traveling to Antarctica, did any of your Lean Six Sigma background come in handy?

Once you've drank the Lean Six Sigma "Kool Aid," you can't help but look at processes everywhere — at the airport, at a restaurant, etc. This expedition was no exception. You're watching how they check you in to board, or get a zodiac or kayak in the water, and you're questioning why they do it the way they do.

I did run into a few Green Belts and Black Belts on the trip. There were only 100 passengers so in three weeks you got to know just about everyone. Sometimes in the evening at dinner we would question why the crew did something the way they did and try to work out a better way to get it done. The crew were very gracious in our attempt to 'help.'

Do you have any other fun adventures planned for the future?

Absolutely, I want to have all seven continents stamped on one passport. I've got Australia and Africa to go. As soon as Covid allows, I'm going to spend a week canoeing the Amazon, climb the Andes to Machu Picchu, take a train across Australia, and my ultimate goal is to climb Mt Kilimanjaro in Africa!