Design for Six Sigma and FMEA


While we're on the subject of DFSS: there was an interesting news item in the national press recently. It seems that U.S. Navy F/A‐18 jets are experiencing brake failures, including a crash in San Diego that totaled a $30 million plane.

According to the Associated Press: "Many of the brake failures have been traced to a $535 electrical cable about as thin as a drinking straw that controls the jet's antiskid brakes, the equivalent of antilock brakes on a passenger car. Investigators say the cable can chafe or break, since it runs close to where heavy tie‐down chains secure the jets to a carrier deck." See story here.

Looking at the picture below, it doesn't appear that any complex engineering analysis would have been required to identify the potential failure mode of routing a thin wire in close proximity to heavy tie‐down chains. A design FMEA should have identified this potential problem, and saddled it with a very high RPN. 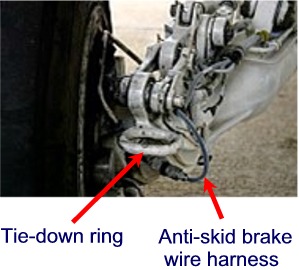 In my past life with an automaker, we conducted "Fresh Eyes" reviews prior to the launch of new vehicles in order to identify just such problems which may have escaped prior scrutiny. Knowledgeable personnel were brought in from outside the affected product or process to make a thorough review, looking for potential problems using a â€œFresh Eyesâ€� approach unhindered by familiarity with the subject of the examination. Wire harness routings were one of the most common concerns noted.

When you look at the landing gear picture above, you are probably shocked by the obviousness of the potential problem. Iâ€™m guessing that flight deck operators had previously noted the problem, and may have even mentioned it to their superiors. I can imagine investigators talking to the flight deck operators only to hear the familiar refrain: "we've been telling them about this problem for years, but nobody listens."

I hope that's not the case, but my experience tells me that there is a fair probability that it is.